Children of the Manse

Growing up in Victorian Aberdeenshire 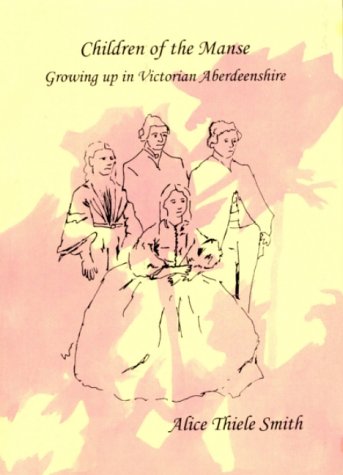 What was it like to be a girl, born and brought up within a Free Kirk manse in the heart of Aberdeenshire during mid-Victorian times? Almost certainly no other account now exists that is in any way comparable to this fascinating story by Alice Thiele Smith, ninth of the eleven children born to Jane Robertson and Dr William Pirie Smith, Free Church minister of Keig near Alford. Alice was born in 1858, married a young German lad in 1883 and lived the rest of her life abroad. Late in life she wrote down the story of her childhood for the interest of her grandchildren.

It was only very recently that these unique memoirs were discovered and subsequently translated by her great-granddaughter, Astrid Hess, in collaboration with Dr Gordon Booth (a native of Aberdeenshire with a particular interest in Alice’s famous brother, William Robertson Smith, Hebrew scholar and polymath, heretic in the eyes of his contemporaries yet now remembered as the Scottish pioneer of modern Biblical criticism and comparative religion).

Alice’s tale, however, is not about her brother’s tempestuous career but deals with the everyday interests and pleasures, as well as the numerous trials and petty restrictions, of a girl’s upbringing within the confines of a home-life in the 1860s and 70s, where the Shorter Catechism ruled supreme and where illness and death were constant visitors. A respectable marriage tied to a lifetime of domesticity were the only legitimate female ambitions for surviving daughters such as Alice: how she resolves those frustrations with her big brother’s aid is just part of this intriguing and illuminating book